Using the power of TikTok while taking advantage of a trend in China to pair red meat dishes with bourbon and other spirts, USMEF partnered with Jim Beam for a “crossover” promotion of U.S. beef and pork in Shanghai.

Funded by the Agricultural Trade Promotion Program (ATP), the “Eating U.S. Meat, Drinking U.S. Spirits” activity was designed to capture the attention of a new generation of chefs, foodservice managers and members of the food media.

A short video of the cooking demonstration and tasting session can be seen here. 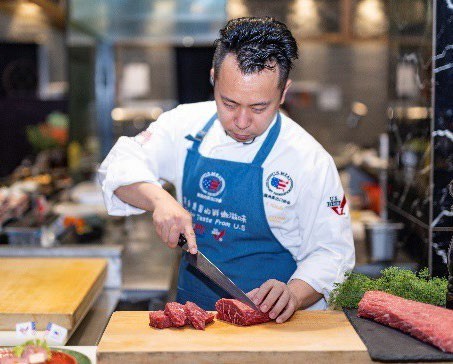 A guest chef explained the attributes and versatility of U.S. beef and pork while creating a traditional Japanese dinner. A cooking demonstration and tasting session followed.

The crossover promotion carried forward to six popular restaurants in Shanghai in which customers received a Jim Beam highball with the purchase of a U.S. beef or pork dish. USMEF promoted the restaurant campaign on Tiktok, a video-sharing social media platform that is increasingly used as a digital marketing tool.

USMEF invited eight key social media influencers to the six participating restaurants for tasting sessions and shot videos for menu promotion. The influencers promoted the dishes and shared their thoughts about U.S. red meat’s high quality and unique flavor on the videos, which drew considerable interest from their TikTok followers.

“TikTok and similar platforms are developing faster and faster, and has serious impact on the traditional foodservice industry,” explained Liang. “Social media is essential for restaurant promotions, especially when we are trying to reach young consumers.”