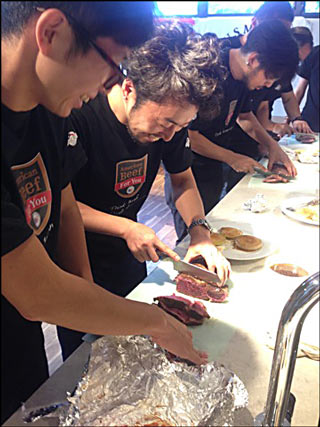 USMEF teamed with a popular Japanese men’s fashion and lifestyle magazine for a men’s cooking event at a kitchen studio in the fashionable Daikanyama district of Tokyo. Featuring U.S. beef as the main dish for the upcoming holiday party season, the event offered an opportunity to cook thick-cut U.S. beef. Funding support was provided by the USDA Market Access Program (MAP).

More than 100 applications were received from readers of Oceans magazine. The 15 participants chosen were working men in their 30s and 40s who regularly cook at home. Most of the men were married and wanted to learn how to prepare U.S. beef for their families.

“As people’s lifestyles are changing, many Japanese men are now keen on cooking,” said Satoshi Kato, USMEF-Japan marketing manager. “According to a consumer survey conducted by Macromill, 40 percent of men 20 to 50 cook once in a week, and 60 percent cook at least once in a month.”

To capitalize on this trend and increase awareness of U.S. beef among Japan’s male consumers,

USMEF chose Masashi Miura, a fashion model popular among Japanese men, as the instructor. A licensed chef, Miura is also known as a cooking specialist who has his own blog to introduce original recipes.

“The men learned about U.S. beef’s attributes and high quality, and they enjoyed cooking in a very friendly and relaxed atmosphere,” said Kato. “They were also impressed with how easy it is to prepare roast beef using a frying pan, as well as the gorgeous presentation of thick-cut U.S. beef.