The U.S. House of Representatives Committee on Agriculture is currently conducting a series of subcommittee hearings in preparation for the next farm bill. On Feb. 28, the Subcommittee on Livestock and Foreign Agriculture held a hearing titled, The Next Farm Bill: International Market Development. The primary focus of the hearing was to examine the benefits derived from the USDA Market Access Program (MAP) and Foreign Market Development (FMD) Program.

“The United States has entered a number of free trade agreements and made great advancements in market access, but while market access played a part in our export growth, market access alone does not guarantee exports,” Seng explained. “How many times have we been elated about newly opened markets, only to be confronted by consumers who are skeptical or simply unaware of our products’ safety and quality? We must dignify trade access with sound marketing programs, and Market Access Program funds have allowed us to address these challenges. Together, access and marketing are a proven recipe for success.”

“At the beginning of this decade, only 5 percent of Korean consumers were confident in the safety of U.S. beef,” Seng noted. “Although a free trade agreement between the U.S. and Korea was about to be finalized, how could we possibly capitalize without addressing this situation? MAP funding played a critical role in restoring faith in the safety of our product.”

Seng received several questions from subcommittee members who were interested in learning more details about the returns red meat exports deliver for livestock producers. This led to a dialogue about how certain beef and pork cuts command significant premiums in international markets.

“That’s really the beauty of the export market,” Seng explained. “Every pound of meat sold in the international marketplace is sold for more than it would be here. We have a diversified portfolio with exports going to almost 100 countries, maximizing the value of each cut.”

Seng was also asked about the most prominent competitors in the global red meat marketplace. He noted that the European Union is an aggressive and well-funded competitor in the pork arena, especially since losing access to Russia – formerly the EU’s largest export market – in 2014. Seng explained that Australia promotes beef aggressively in key Asian markets, and has tariff rate advantages in some destinations – including Japan.

In addition to Seng’s testimony, Dr. Gary Williams, professor of agricultural economics and co-director of the Food, Agribusiness and Consumer Economics Research Center at Texas A&M University, presented the results of a study showing that USDA market development programs have been highly effective in boosting U.S. agricultural exports and export revenues. From 1977-2014, the programs added an annual average of 15.3 percent ($8.15 billion) to the value and 8 percent (11.5 million metric tons) to the volume of U.S. agricultural exports, generating a net return of $28.30 in additional export revenue for every dollar invested.

“Two previous studies concluded that the USDA export market development programs have been highly effective in promoting exports with substantial benefits to the U.S. economy,” Williams noted. “I must say that I was skeptical of those results. So our research team devised a completely different and highly rigorous methodology to test whether those export promotion programs were as effective in promoting U.S. agricultural exports and as impactful on the U.S. economy as the previous studies purported. I was personally surprised by the results of our study.” 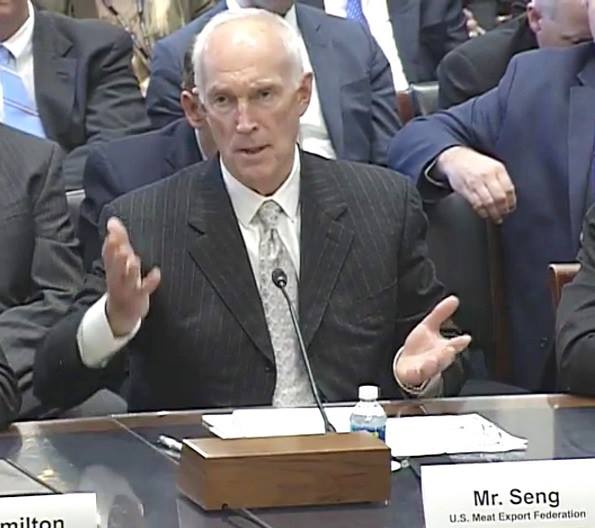